Drumlane Abbey is Located just outside the village of Milltown, County Cavan on a beautiful site overlooking Garfinny Lough, the intriguing monastic site of Drumlane includes an abbey, a monastery and a remarkably intact round tower constructed in the year 555AD.

The imposing Drumlane Round Tower forms part of an ancient monastic site in Milltown, County Cavan. Along with an abbey and church, the distinguished round tower was founded by Saint Columba in 555 AD. The original tower was made of wood but it was replaced with stone in the 12th century under the stewardship of Augustinian monks.

During the middle ages, the Drumlane estate was ruled by the O’Farrelly clan; today a medieval gravestone with intricate carvings is said to mark the burial place of a member of the family. The nearby church is the largest of the buildings to survive, but the monastery was far more extensive in its original form.

Drumlane Abbey was attacked and burned in 1261 by the O’Rourke family, then suppressed as part of the Reformation in the 16th century. Some of the lands were awarded to the O’Reilly clan by the English monarchy, but after the defeat of the rebellion of 1641 the land was farmed by planters.

The round tower is the most distinguished part of the estate, a tall circular stone structure that remains the only surviving round tower in the Diocese of Kilmore. Round towers are of Christian origin and were erected at various periods between the 5th and 13th centuries to serve as a place of refuge in which valuable relics and manuscripts were hidden during attack. The entrance to the tower itself about nine feet above the ground.

Drumlane Abbey overlooks glorious Garfinny Lough and provides breathtaking views over the lake. Swans and whooping cranes abound in this peaceful lakeside setting. Visit Drumlane Abbey to find a wonderful natural retreat and the perfect place in which to spend a tranquil morning. 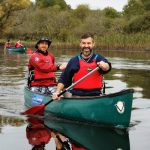