Dunbrody Abbey was founded in 1170 on the instructions of Strongbow, by Herve de Montmorency (his uncle), after the Norman invasion of Ireland. It was completed circa 1220, but additions may have continued for some time. Herve de Montmorency made a grant of the lands to the monks of Bildewas in Shropshire (England), on condition that they should build the Abbey, for some monks of the Cistercian, or White Order (they wore white robes), and upon condition that there should be a Sanctuary in the Abbey for all malefactors. Dedicated to “St. Mary the ever Blessed Virgin, and St. Benedict” it has sometimes been called the Abbey of St. Mary de Port, for the refuge it contained by the express condition of its founder.

Herve de Montmorency became the first Abbot of Dunbrody and died there in 1205, at the age of 75, and was buried in the Abbey. The Abbey flourished for several centuries, but not without certain problems. In 1355, the Abbot and his monks appear to have taken to the Highway line of business, for it is said that William de Ross, Abbot of Dunbrody, and Adam and Hugh Barry, monks, were indicted for imprisoning one Thomas Herlyn, a monk of Tintern, and stealing two of his horses to the value of forty shillings. Also they expelled Thomas de Wiggemore, Abbot of Tintern, and robbed him of three horses to the value of eight marks. They were acquitted, perhaps fortunately.

The Abbey’s demise started when Alexander Devereux, the last Abbot of Dunbrody, granted to the King, his heirs and successors, the Abbey and all its possessions circa 1542. Alexander Devereux changed religion, and became the Bishop of Ferns. The lands and Abbey then came into the possession of the Etchingham family. In 1642, Jane Etchingham, the heiress, married the second Earl of Donegall, whose descendants (Chichester family) own the lands to this day. It was handed over by the Chichester family to the Office of Public Works in 1911, and is maintained to the standards you see today by them. 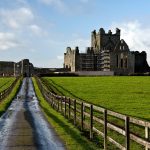 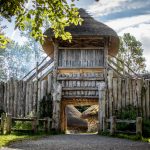