Dun a Ri Forest Park forms part of what was formerly the Cabra Estate which was owned by the Pratt family. Legend stretches back to the time of Cuchullain the Gaelic warrior who rested in these woods while fighting the armies of Queen Maeve of Connaught. The O’ Reilly family owned the lands up until the end of the 16th century when they were acquired by Thomas Fleming who built Flemings Castle . The ruins of the castle can still be seen in the park. The estate was acquired by the Pratt family and they built the town of Kingscourt in the years 1760-1770.The lands were acquired by the Irish Forest Service in 1959 and were developed into a forest park in the early 1970s.

There is a great diversity of wildlife in the park.

The flora is varied and in many areas spectacular. The tree storey is dominated by oak and ash but includes many other species often with an under storey of hazel, holly and rhododendron. The ground is, in season, carpeted with a rich layer of plants including snowdrops, bluebells, wood anemone, woodrush, foxgloves, wood sorrel and a wide range of ferns.

Walking is a great way to experience the delights of Dun a Ri while also benefiting both physical and mental health. Set your pace to suit your enjoyment and you will quickly feel fitter and better.

There are a number of beautiful sculptures within the park

There is a pay barrier at this Forest Park. Check open and closing times on arrival. 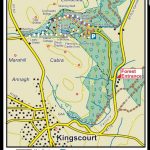